The Present, Or Christmas Gift

While this story revolves around Christmas, it could just as easily be any time we give gifts.

Once upon a time, there was a man who thought he had everything. He had a comfortable home, a loving wife, and a little girl.

The man's wife passed away, suddenly, and the man was beside himself, in grief. Although he still had a small child to care for, all he could think of is what he had lost.

After a little awhile, he found he was also out of a job. Grief stricken and with no job, money became a challenge. He and his little daughter had to move into a tiny apartment just to get by.

The holidays were approaching and the man did his best, but he just could not find the holiday spirit. However, he did get a Christmas Branch and explained to his daughter that they would not have a tree or any presents under the tree, this year. They would have to pretend the Christmas Branch was a Christmas Tree.

"That's ok, Daddy", said the little girl. "It's a beautiful tree and I don't need any presents".

The man felt guilty and was determined to find work.

After a long, discouraging, day of job hunting, the man came home to find a decorated box, on the Christmas Branch.

Infuriated, the man shouted at his little girl "Don't you know wrapping paper and ribbons cost money? Go to your room!"

Disappointed, the little girl went to her room and to bed.

The next morning, the little girl woke up and went to the Christmas Branch. She picked up the present, brought the gift to her father, and exclaimed "Here, Daddy. This is for you!

The man became ashamed at his anger of the night before and decided to begin again. He said "For me? Oh thank you!" and opened the gift.

Just as he did, he became even angrier than the evening before when he saw that the box was empty. He yelled at her, "I can't believe you would wrap up a box of nothing and give it to me! A gift box is supposed have something inside!"

The man's little girl looked up at her daddy, with tears in her eyes and said "Oh, but Daddy. It's not a box of nothing. The box isn't empty. I blew kisses into the box to help you to be happy. They are all for you, Daddy."

The man was flattened. He began to realize how absorbed he had been in his own troubles. He forgot all about the love that was right there in front of him all the time. He put his arms around his little girl and asked for her forgiveness.

That day, the man made a new start. He and his little girl decorated the little apartment with what Christmas decorations they had and with decorations that they made together. Even with no presents, that year, was the best Christmas ever.

They say the man kept that Christmas box next to his bed the rest of his life. Whenever he felt discouraged, he would open the box, take out a kiss, and remember the love of the child who had put it there.

When life serves up something harsh, remember to look around you for things to appreciate and never forget that love always surrounds you.

Every challenge is an opportunity to begin in a new direction. A door never closes, but a window is opened.

Each of us has been given a golden container of love and kisses, from friends, family, pets, and most of all from our angels, guides, and Source. There is nothing more precious that anyone could hold.

Other parts of the garden of inspiration you might enjoy 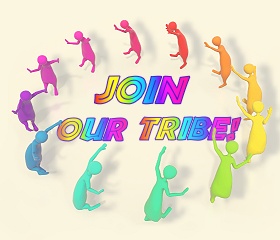 Join Now!
Join Our Tribe and get your FREE Mystical Insights! Want to know more, before you join? Read More, Here!

And above all, watch with glittering eyes the whole world around you because the greatest secrets are always hidden in the most unlikely places. Those who don't believe in magic will never find it.
~Roald Dahl

Get My Spirit Mystical Insights &   Join Our Tribe!

We and Respect your privacy! You can read our Terms Of Service, here. EZ Unsubscribe: You may unsubscribe, at any time, by clicking on the link in any email.

We use cookies. We use them for things like this; so you don't have to see this notice, again. We do not use them to track you on our main site.

By clicking "I accept cookies", you agree to the use of cookies and this notice will not appear, again, until you open a new browser instance and return to My Spirit. If you click "No Thanks", we will not set any cookies, but you will see a popup every time a cookie is normally set(this will happen on every page).